A week late, I’ve decided to follow up on all the events of last weekend. Around Wednesday, I was trying to mentally prepare for the arduous task of fully moving out of my old apartment. Although, Cait and I moved down to Tampa, our old apartment still housed some of our belongings. On Thursday, I made the trip up to Gainesville, and got a little work done. Ok, I’m lying — I laid on the couch. Later that night, I decided to go see Captain America (3.5/5 stars) at the movies. The next morning, I got a call from Cait: “When will you be done today? We’re going to the cabin again this weekend with Michael and Melissa. I think John, Michelle, and Liam will be coming too!” I guess I really needed to put some “pep in my step.” I’ll say, the call was a necessary reinforcement to get the job done.  I mean, I wasn’t necessarily procrastinating because it was a lot of work, but more because there was this residual feeling of “home” that I was about to leave behind.  Home to me was Cabana Beach. I had lived there for 5 years — the longest I had ever lived at any single location. To Cait, Cabana Beach will be remembered as a place where robberies and late-night block parties were oh-so-common.

When I was a Boy Scout, my dad always said “always leave a campground better than you found it.”  I will admit, it was hard to improve that student-living apartment. However the American Flag can make even the darkest and dustiest places seemingly hospitable (think the moon). So before I left, I staked a small flag into the astroid-looking rock outside of our old home. 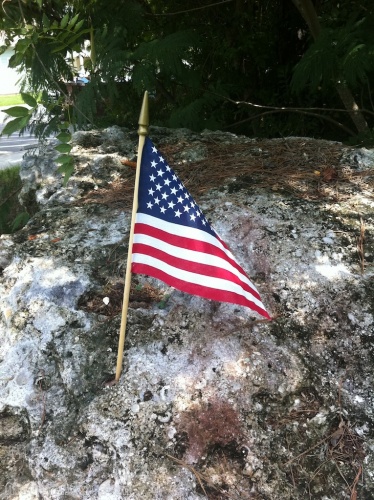 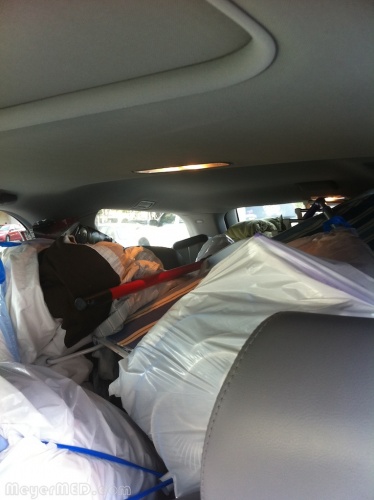 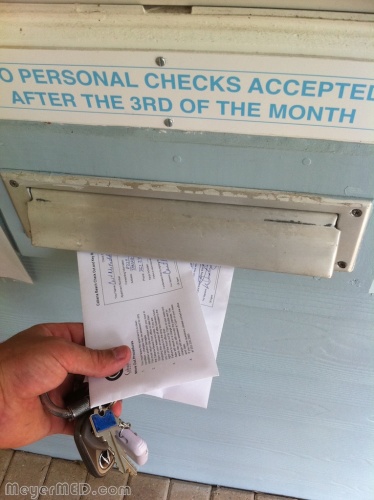 Two hours later, we met up with Michael, Melissa, John, Michelle, and the little one at their families’ cabin in Homasassa. Immediately anxious to get out on the water, we decided to go for a night boat-ride. 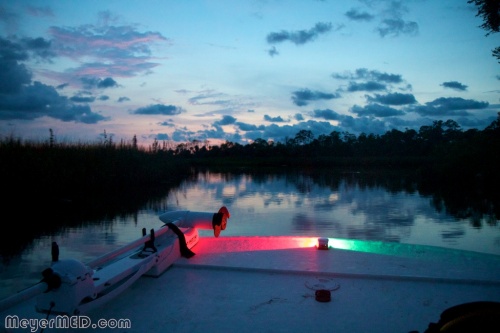 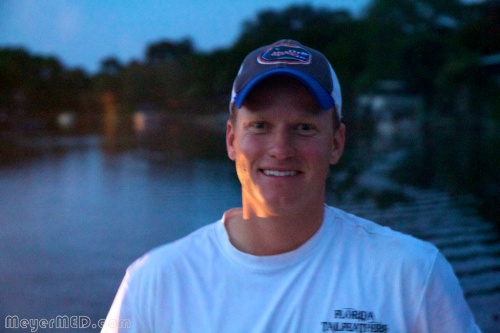 When we got back to the cabin, we sat around and had a couple drinks. Let’s be honest: the phrase “heavy drinking” is very relative to the person saying it, because these days three beers will leave me with a splitting migraine in the morning. 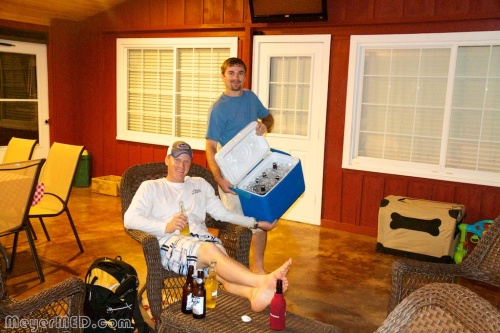 Ultimately I did wake-up the next morning with that predicted cranial insult, so I took some Ibuprofen before I started to prep the boat. After all was done, we filled Liam’s pool with water, and went scalloping. 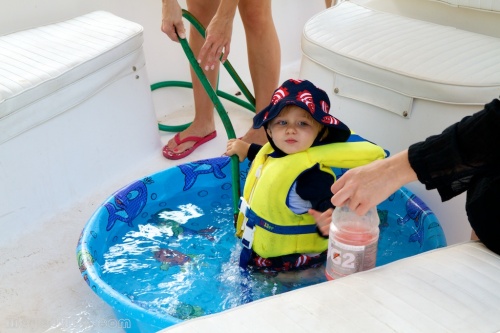 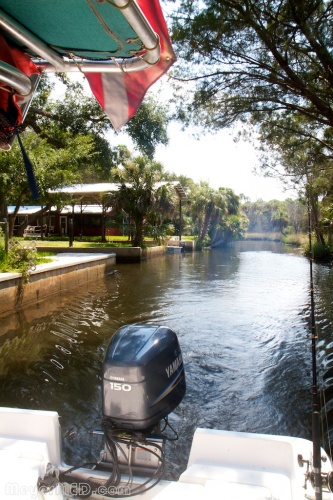 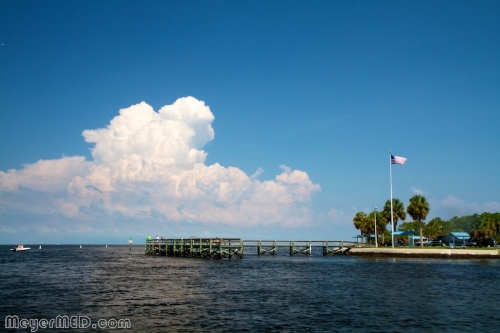 Immediately upon arriving to the scalloping site, I put on some fins, mask, and a snorkel and attempted this Navy Seal scuba-backflip off the side of the boat, only to hit my head hard on the hull before I landed in the water.  I wasn’t sure if it was the growing knot on my head, the hangover, or a mixture of both, that resulted in the worst 30-minutes of swimming I had ever done. Fortunately it all subsided, and we went on to catch some amazingly big scallops.

Later in the afternoon we went down the road to grab some drinks at the Bayport Inn. 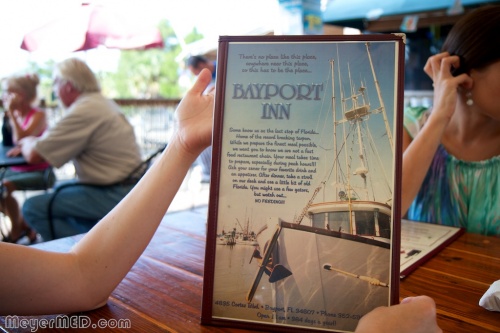 Cait noticed some Hurricane flood markers on an electric pole and questioned what they were. Remembering that New Orleans recently put these in the neighborhoods inside the newly build levies, I was able to offer an answer.

Inside Bayport Inn, we ordered drinks…and let me tell you — nothing feels like vacation more than a Piña colada. 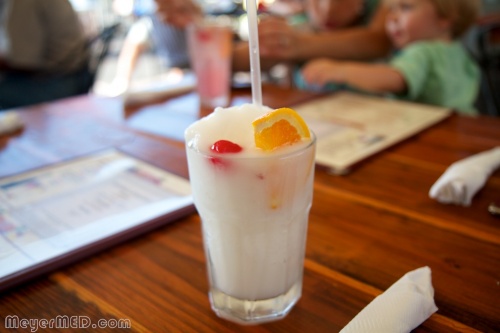 …and of course, pop tarts. 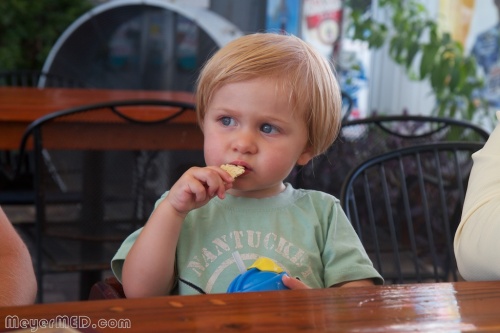 Afterwards we went fishing, and the girls went shopping. I didn’t take any pictures of the shopping, and no, we didn’t catch any fish. 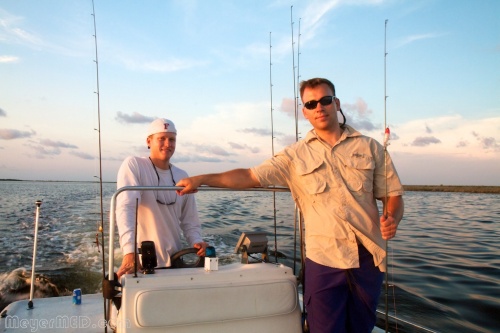 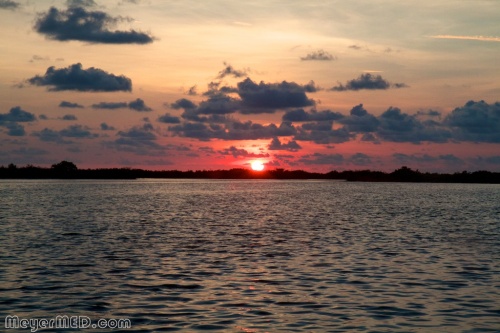 But the food at the end of the night was soooo fulfilling. 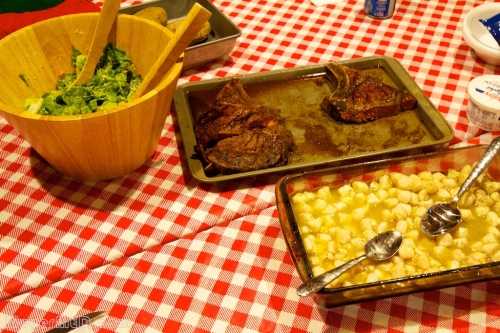 The next day we all woke up with food-babies. Realizing that  we woke up one hour before church starts, and church was more than an hour away, we opted to spend Sunday on the water. Our plan was to make the 50-mile round trip in a boat to eat in Tarpon Springs and relax on the adjacent beach of the Anclote Key State Preserve. Liam and his mom took ground transportation, as the rough water might have been too abrasive for the little one.  The GPS ultimately made it’s way back in the car during the return trip, as you can see from the map below.

Tarpon Springs is a touristy town known for it’s sponge harvesting and docks.  We’ve been there once before (riding by bike via the Pinellas Trail), but it was a lot more welcoming by boat. 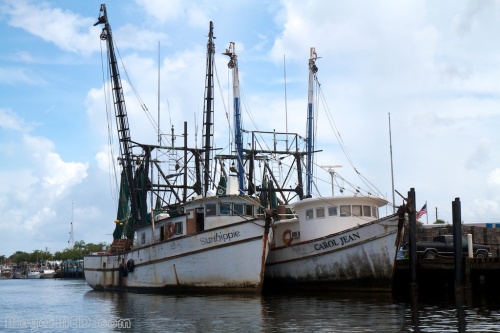 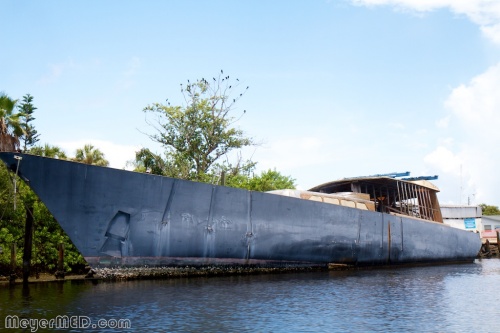 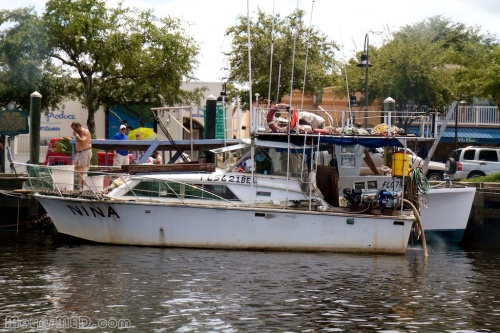 While we were there, we stopped by Captain Jack’s to grab a quick bite to eat, and enjoy another Piña colada. 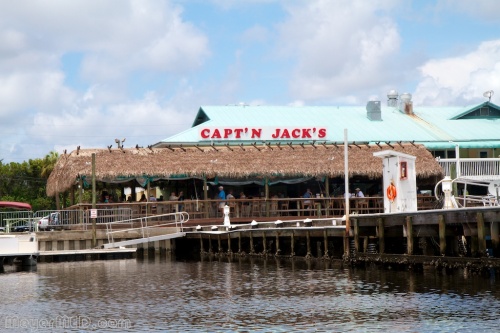 The drinks were considerably better than Bayport Inn’s. Afterward we traveled westward on the Anclote River past Meyers Cove towards Anclote Key State Preserve.
Upon arrival, Michael noticed a group of fiddler crabs fiddling around under the pier. 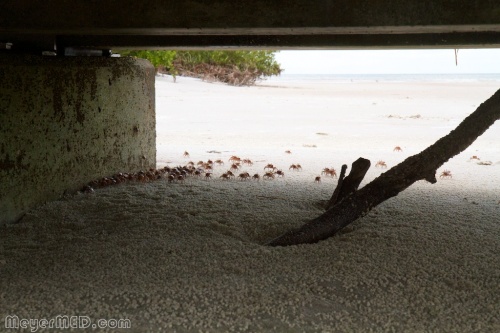 After John picked one up, it was determined that it was safe for baby Liam to go crabbin’ for the first time in his life — only if he pursued the female fiddlers, because the males have a dominant pincher on one side (read about my last experience with another ferocious crab). 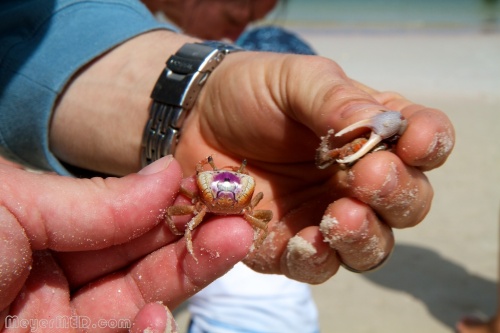 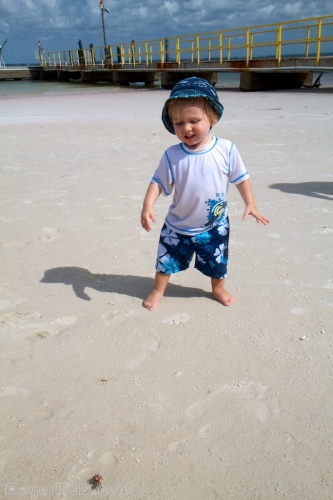 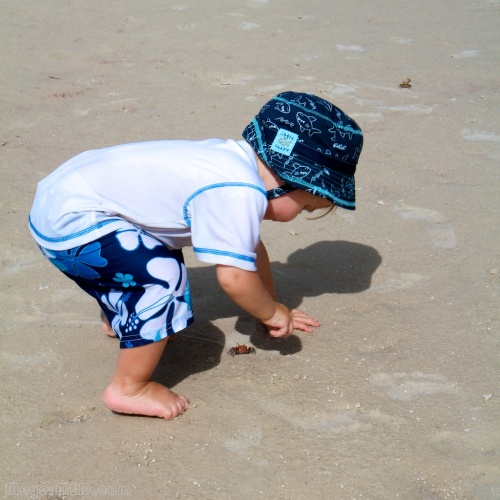 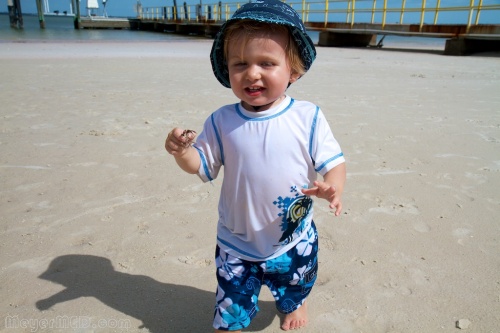 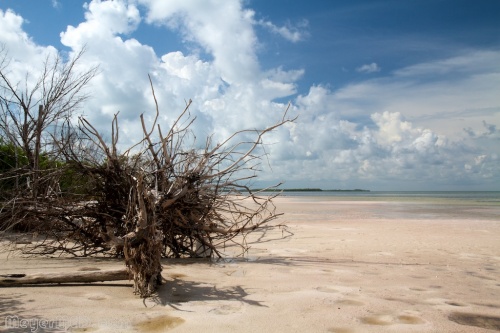 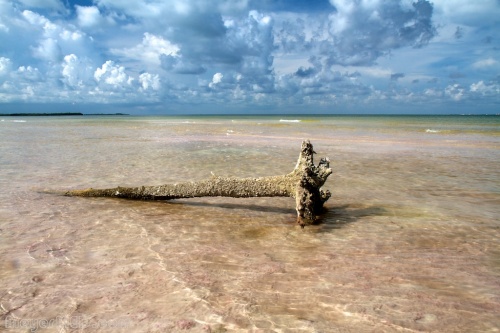 For me to recommend it would seem hypocritical to my last sentence, but it’s hard to not recommend such a beautiful and relaxing place. 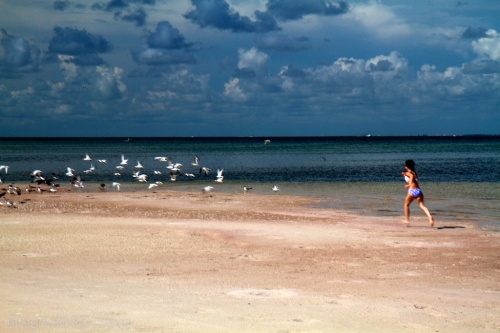 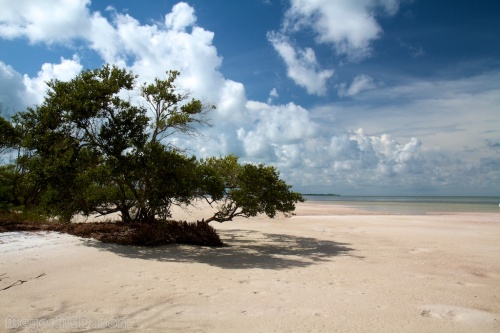 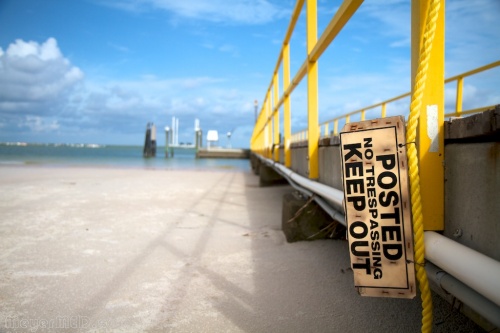 View more photos
← “It’s not an adventure, until something goes wrong.”
Kayaking in Silver Springs →