I took another trip to Hillsborough River State Park.  This time to visit a rebuilt version of the old Fort Foster.  In 1835, Florida was still considered a frontier land (despite it being on the same coast as the 13 colonies).  There was still an ever-present hostile relationship between the federal government  and the Seminole tribe native to Florida. After many relocation demands from the Federal government, the Seminole tribe began to grow increasingly angry.  At the time there were two major military forts in Florida.

Ft. Brooke (now Tampa) and Fort King (now Ocala) were connected by a 100 mile path through the forests of palmettos known as Fort King Military Road. The thousands of feet that have traveled the road left behind a distinct path that is still visible in some places to this day.

In December of 1835, military officers at Fort King requested troop reinforcements to defend against the Seminole attacks.  Major Francis Dade and 107 soldiers and a canon made their way northeast from Ft. Brooke along the military road until they ran into the Hillsborough River. Cold, hungry, and tired they waited on the south edge of the river to recover from their exhaustion and to build a bridge to get their heavy canon across.  After several days, they crossed and traveled further north towards Ft. King.

On a few days after Christmas of 1835, Maj. Dade and his 107 troops were walking through a pine forrest when they were ambushed by an overwhelming number of Seminole warriors. All but 3 soldiers died during the massacre. However in the end, only one of the soldiers lived to tell his story, as the other two died after succumbing to the wounds they received that night. Ransom Clark was the only soldier who survived to write down his story and Maj. Dade’s name will live on forever reflected in the names of a county and a city of Florida.

In March of the following year (1836), a unit of Alabama National Guardsmen was dispatched  along the old military road to rebuild the bridge spanning the Hillsborough River that was burned down by the Seminoles. This time to protect the bridge, they built a makeshift outpost.  This small outpost was apply named Fort Alabama. Unfortunately the summers in Florida can be rather unforgiving: mosquitos bring malaria and the heat promotes bad hygiene which can further increase prevalence of dysentery. Many soldiers died. So when summer came, the fort was ultimately abandoned and the troops traveled north.  The Second Seminole War was one of the longest wars in US History. When the troops returned to the fort in the winter of 1836 the fort and bridge were burned down.  They rebuilt the bridge and fort and secured it, now naming it Fort Foster.  In the summer, they again abandoned the fort.  Each time they left the fort, it and the bridge were burned. Today there sits a bridge and a fort based on found documents of what the fort would have looked like in those days.

Here are some of the pictures I took at Fort Foster. 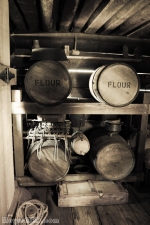 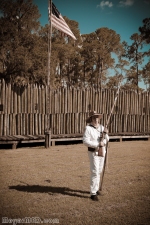 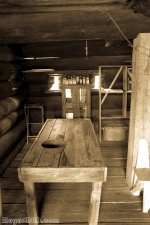