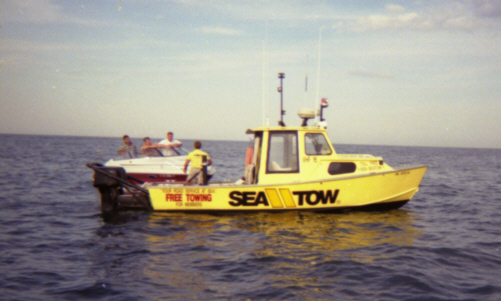 This year, it was unfortunate that we didn’t just merely run out of fuel…

We starting the morning by prepping the boat, making sure we actually had a near-full tank of gas, cleaning of the live-well of the crabs caught the night before, rinsing the deck, filling the cooler with water and Gatorade, rigging the fishing poles, etc. Michael sees a crab in the front of the boat that escaped the ice death his buddies were being induced to.  Michael reaches down with a Styrofoam cup to try to get this crab to squirm in a direction that would make it easy to pick him up without a net. After about 5 long minutes of dancing around the boat with this crab, I saw an opening to reach down and grab it from behind.  Unbeknownst to me, this crab had incredible flexibility, which became shockingly apparent when he reached under his own body and grabbed the tip of my index finger with his large claw! YOW! Human “intelligence” once again is inferior to nature’s evolutionary instincts. Seconds later we moved the crab from the boat to the grass using a net. I thought he deserved a different fate than his friends for his valiant effort, but many would (and did) disagree. Laughably, leaving him be was almost reckless, as the crab later almost grabbed the tip of a dog’s nose that was poking around the area.

After my finger was bandaged up, we boarded the plywood flats boat and set off hoping we would bring back some redfish for dinner. 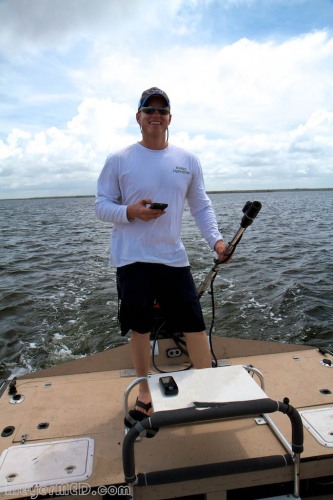 We were fishing for about an hour without any luck, so we moved to a shallower location.  At one point the water was so low, Michael jumped out to push the boat through a small opening of vegetation.  When he got back on the boat, he was surprised to find the trolling motor was not working. By inspecting the cables, it was obvious what the problem was: the wires had become exposed through over-use and tension, created a short circuit and melted together. In any normal circumstance, this is a 1 minute fix, but given that we had to fish some excess wire from inside the hull (or claustrophobic storage compartment) of the boat, this was more troublesome than it looked.  I climbed into the 1.5 square foot hole, pulled the cable through, spliced it with a Gerber I had in my backpack (Boy Scout motto: “Be Prepared”), and fed it back to Michael, where he spliced the other ends and duck-taped the wires to keep them separated. 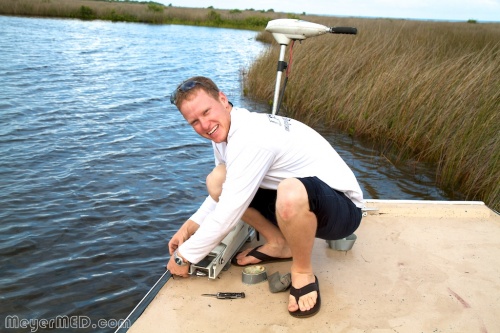 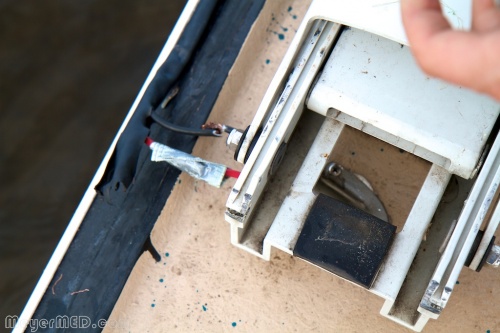 After changing the fuse, the motor immediately cranked up.  We fished for a little longer, trying a couple more spots for trout, but after having no luck and seeing the incoming storm, Michael increased speed, and we started our way home. 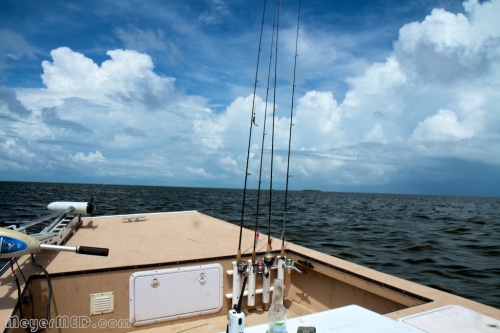 On the way back, we were talking about not catching any fish, dodging the incoming storm, careless boaters, hardcore scallopers (about to get swallowed by the storm), and “Is it normal for the floor of the boat to give this much?” The ride back was rough; the waves got tougher and my back started to hurt, so I moved to the more-forgiving back of the boat with Michael until we returned back at the cabin.

After the storm cleared, we all decided to go out and try our luck at scalloping. We loaded two boats, the plywood boat we were on earlier, and another nicer boat. We told our friends in the nicer boat to lead the way, so we could follow their smooth wake out to the dive spot. 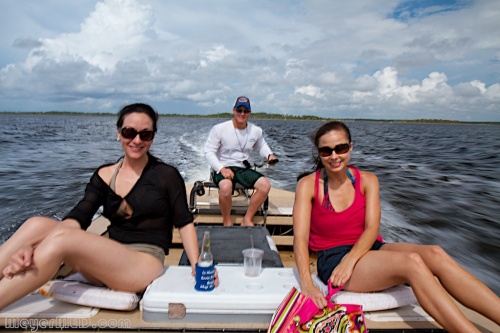 During the trip out, Michael noticed our friends in front slowing down. He said “I think they’re trying to splash us,” so he slowed down as well to avoid the aquatic assault. Soon after they sped up again to our original speed of around 20-25mph. Not even 5 minutes later, I was sitting on the footlocker (see above) facing the port side of the boat when I felt a huge rush of water come from the bow of the boat.  I immediately thought “they got us wet!”  Then I felt the box under me trying to float, but tipping into the water — the same box that has my Canon 7D and lenses in it.  I looked to the front of the boat, and it was totally submerged. Cait and Melissa were originally sitting near the front facing the bow, when the floor of the boat ripped out from underneath our feet as we were going 25 miles per hour. The sudden halt jolted both of them forward in the boat. Somehow, as one of our friends from the other boat observed and later told us, Melissa was flipped upside down and all they saw were her legs sticking out of the water. Fortunately, after we all gathered our composure, everyone made it out physically unharmed, and so did my camera gear! 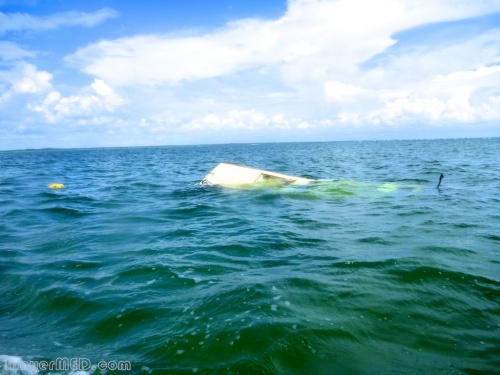 When we all boarded the nicer boat, we appraised the severity of the damage done to the flats boat, and called Sea-Tow. Even with a membership, they said they do not tow sunken boats, but they would attempt for a nominal fee of $4,000. Melissa said, “WOW, I’ll swim the boat out for $4,000.” Hearing the news, we decided that we were better off trying to the tow the boat back in ourselves. 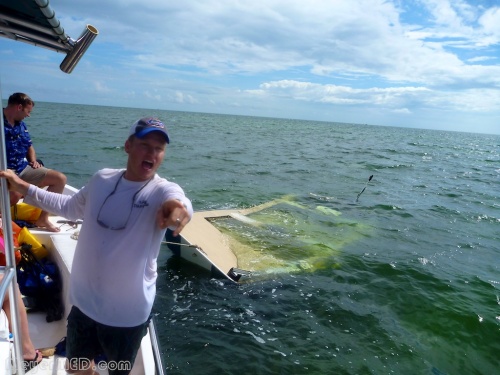 I jumped back into the boat, dove into the 1.5 square foot hull while it was under water, and recovered life jackets, nets, and chairs that were attempting to float inside. 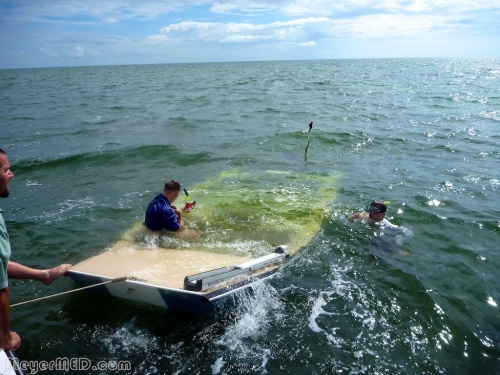 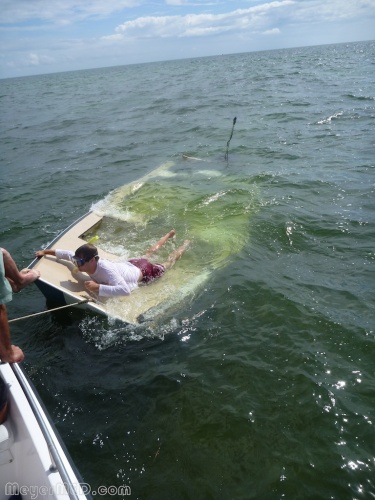 Using the radio on the other boat, we made several attempts at reporting the boat (for liability and environmental sake). Soon, we realized the attempts were futile, and we were better off returning home so we could remove the kids from the boat and come back out to potentially salvage the remains. At the last minute, I remembered that I forgot that my Garmin Oregon 400t GPS was attached to the captain’s chair (which was underwater).  I dove back in to fetch it, believing that it was ruined by being underwater for 30 minutes at this point, but was surprised when it worked perfectly after I retrieved it.

On our way back, Melissa’s Brother-in-law called his friend Zane who had been fishing in the water near our location.  He met us in the channel, where I hopped on to his boat to show him where the wreckage was, while everyone else went back to the cabin on the other boat. Zane and his Father-in-law tied the sunken boat onto their boat and began towing it back. 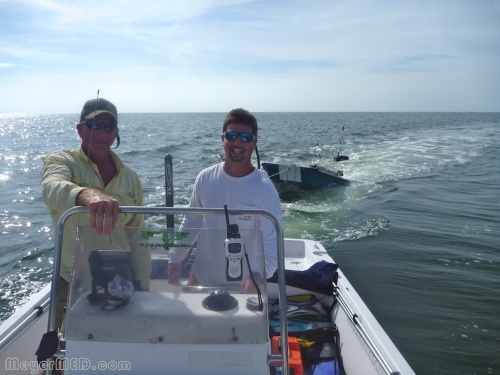 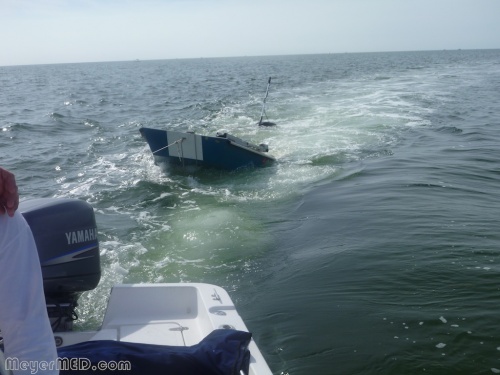 This was a feat in itself, and after hours of hard work, expert command and maneuvering of his own boat, Zane and his Father-in-law successfully towed the entire boat (except the piece of floor that washed away at 25mph) until we could winch it out of the water. Because of Zane’s successful effort, I figured I’d give his fishing and hunting charter business a plug here: FLTailFeathers.com.

In the end, I rode back to the cabin with some friends, and we enjoyed a feast of sea food that was caught (by them) the night before! 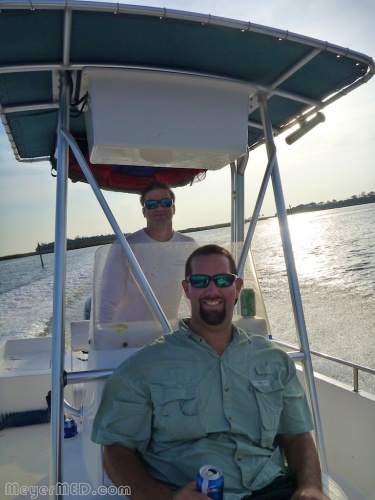 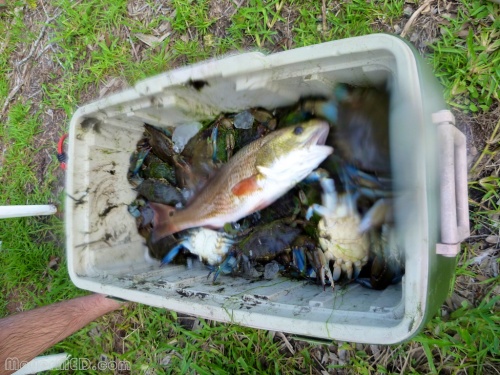 ← A new bike, a new home, and the 4th of July celebration!
Anclote Key State Preserve and Tarpon Springs →

4 Comments on ““It’s not an adventure, until something goes wrong.””